The Need to Feed survey was developed as part of a larger project on lactation/feeding rooms on the University of Maryland College Park (UMCP) campus. The larger project includes a grant from the UMD Student Facilities Fund to improve current facilities and establish new facilities if/where needed. The project is being conducted in partnership with The President’s Commission on Women’s Issues (PCWI) and the School of Public Health, with one project member joining the team from the College of Information Studies.

Purpose of the survey

We created a survey in Qualtrics containing 24 closed-ended questions, open for responses during the 2019 Spring and Summer semesters to campus staff, faculty, and students. The survey was available in English and Spanish. Respondents were recruited through campus-wide, college/department, and identity-specific (e.g., parents) email listservs and newsletters, as well as by word of mouth.

Inclusion in data analysis was set at 60% completion, as a number of important question had already been answered by this point in the survey. Responses meeting this threshold were downloaded into Microsoft Excel, where descriptive statistics of quantitative responses were calculated. Text answers to “other” categories were parsed for commonly occurring answers.

NB: Figures have been inserted as small thumbnails, but are high resolution images when clicked on.

A total of 373 started the survey, but only 344 responses reached the inclusion threshold. 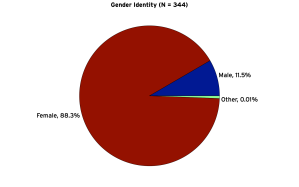 The results from this question were confounded by respondents’ ability to select multiple options from an expansive list. An analysis of these data is ongoing.

Expressing, Nursing, and Bottle Feeding Outside the Home

Approximately two thirds of all respondents (N = 344) had expressed milk (65.4%), nursed at the breast/chest (65.7%), and bottle fed (65.1%) outside of their home. There was not a significant association between campus affiliation and whether respondents had done any of these tasks.

Wanted a Private Space at UMCP to Express, Nurse, or Bottle Feed in the Last 2 Years

Used a Private Space at UMCP to Express, Nurse, or Bottle Feed in the Last 2 Years 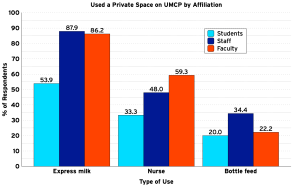 What Kind of Private Space Did You Use at UMCP to Express, Nurse, or Bottle Feed in the Last 2 Years?

Figure 8 shows the private spaces used to express milk, broken down by affiliation.

Figure 9 shows the private spaces used to nurse, broken down by affiliation. 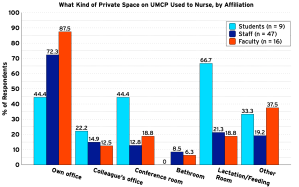 Figure 10 shows the private spaces used to bottle feed, broken down by affiliation.

Other places respondents expressed milk, nursed, and/or bottle fed were cars, outside, or in hallways and lobbies.

Why Respondents Did Not Use Designated Lactation/Feeding Rooms

Figure 11 shows why respondents did not use designated lactation/feeding rooms.

There were no significant associations between reasons for not using a designated lactation/feeding room and campus affiliation. However, students were approximately twice as likely (25.0%) to report accessibilities issues with using designated rooms versus staff (12.9%) and faculty (11.5%).

Other reasons given for not using designated rooms included:

Barriers Resulting in Prevention of Expressing, Nursing, or Bottle Feeding?

Three-quarters (77.5%; n = 111) of respondents felt that the current lactation/feeding rooms at UMCP do not meet the needs of campus community members or visitors.

Figure 12 shows the popularity of the amenities included in the survey.

Other amenities that were mentioned frequently included:

Figure 13 shows that there was no overall consensus about what the best name for lactation/feeding rooms might be. However, there were certain very unpopular choices such as “feeding room” and “quiet room.”

The Existence of Lactation/Feeding Rooms at UMCP

The majority of respondents (98.0%; n = 344) agree that there should be designated lactation/feeding rooms on campus; 3 male (11%) and 3 female (1.0%) respondents disagreed with designated spaces. Reasons for not supporting these spaces included: